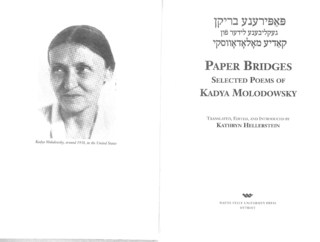 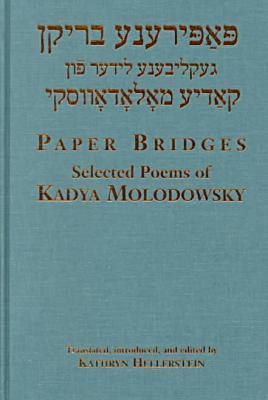 Click here to order from your local independent bookstore

Kadya Molodowsky (1894-1975) published six major books of poetry in Yiddish, as well as fiction, plays, essays, and the children's poems for which she is best known today. She participated in nearly every aspect of Yiddish literary culture that existed in her lifetime, first in Poland, where she lived until 1935, when she emigrated, and then in America, where she lived until her death. Before her emigration, Molodowsky taught young children in the Yiddish schools of Warsaw. In New York City, she supported herself by writing for the Yiddish press and founded a literary journal, Svive (Surroundings), which she edited for nearly thirty years. In 1971, she was awarded the Itzik Manger Prize, the most prestigious award in the world of Yiddish letters, for her achievement in poetry.

One of the few Yiddish women poets to do so, Molodowsky was able to sustain and develop her writing throughout her life. She published continuously from 1927 until 1974. All her books, both poetry and prose, reflect the cultural and historical changes that their author experienced. But the poetry in particular absorbed the often contradictory influences of the cultures among which Molodowsky lived -- the Russian symbolists, the Yiddish modernists (and through them, modern American and European poetry), the Hebrew Bible, rabbinic writings, Yiddish prayers for women, social protest poetry, modern drama, world folk- and classical lore. Although the distinctive voice that emerged from this confluence of cultures addressed the same social issues that concerned her contemporaries, it was given its particular force by Molodowsky's immediate and intense focus on women's lives and works. Because of this focus, Molodowsky's poems reshape the questions that pervaded modern Yiddish poetry: questions about the poet's political responsibility, national identity, religious belief, aestheticism, and individualism. The themes of her poems are often polemical, but the poems themselves rarely slip into easy ideological slots. Rather, they bring the compressed intensity of the lyric to the expansive forms of the meditation, the narrative, and the poetic sequence. Molodowsky's poems play constantly yet unexpectedly upon the Yiddish language -- its musicality, emotional complexity, mélange of dictions. They also encompass the folk idioms, the learned rabbinic phrases, crass Americanisms and neologisms, political clinches and literary affectations. As a result, the poems have a deliberate self-consciousness that exposes the poet at work to her own merciless gaze.

As Molodowsky developed, her poetry came to embody the conflicts within her life. A woman with modernist sensibilities, a Jew thrown into crisis by secularism, an intellectual enraged by social injustice but wary of ideology, Molodowsky wrote in a tradition that was not always sympathetic to her sexual identity, her religious feelings, or her poetic politics.

WOMEN-POEMS
I
The women of our family will come to me in dreams at night and say:
Modestly we carried a pure blood across generations,
Bringing it to you like well-guarded wine from the cellars
Of our kosher hearts.
And one woman will say:
I am an abandoned wife, left when my cheeks
Were two ruddy-red apples still fixed on the tree
And I clenched my white teeth throughout lonely nights of       expecting.
And I will go meet these grandmothers, saying:
Like winds of the autumn, your lives'
Withered melodies chase after me.
And you come to meet me
Only where streets are in darkness,
And where only shadows lie:
And why should this blood without blemish
Be my conscience, like a silken thread
Bound upon my brain,
And my life, a page plucked from a holy book,
The first line torn?

Merciful God,
Sanctify another country,
Another mountain.
We have strewn all the fields and every stone
With ash, with holy ash.
With the aged,
With the youthful,
And with babies, we have paid
For every letter of your Ten Commandments.

Merciful God,
Raise your fiery brow,
And see the peoples of the world --
Give them the prophecies and the Days of Awe.
Your word is babbled in every language --
Teach them the miraculous deeds,
The ways of temptation.

Merciful God,
Give us simple garments
Of shepherds with their sheep,
Blacksmiths at their hammers,
Laundry-washers, skin-flayers,
And even the more base.
And do us one more favor:
Merciful God,
Deprive us of the Divine Presence of genius.